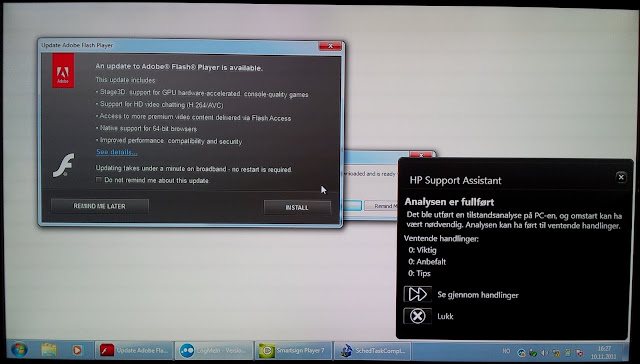 [A rather static show at the hotel tv infochannel...]

Life as a security advisor, or just consultant if you prefer, can be very interesting. Working with a large variety of clients, tasks and situations is challenging, exactly the way I like it! To me it also includes going to other cities here in Norway, at the moment I'm at yet another hotel in Stavanger, Norway.

During the past couple of weeks I've got a renewed interested in hotel television systems. No, not that kind of activity that you may have heard of, or seen demonstrated by Major Malfunction in Las Vegas many years ago. I'm just curious about the risk analysis - if any - performed by the hotels, finding it acceptable to put their infochannel systems directly onto the Internet?
The picture on top of this blog post was taken from Comfort Hotel Stavanger on Nov 10, 2011. Obviously, this system is connected to the Internet, running Windows 7, Adobe Flash, Logmein, Smartsign Player 7 and some HP support software on an HP system. No presentation were running in the background, with HP, Adobe Flash and Windows *begging* for security updates to be installed and reboot the system in order to reboot. Please also note that there doesn't seem to be any antivirus software running, at least from the series of icons present in the lower right. Even my mother knows by now that's a stupid thing to do.

Moving forward to where I'm right now (Nov 14, 2011); at Park Inn Hotel (by Radisson) Stavanger. Came into the reception, and was pleasantly surprised to get a room almost at the top. "One of the refurbished rooms of this autumn" I was told. Excellent.

Yeah, well, at least there's the parquet floors, as promised in the reception. Time to watch the news, turning the thing on usually gets you right to the hotel infochannel at channel #1: 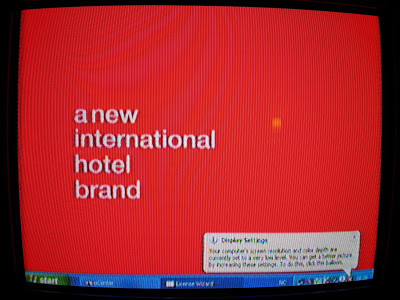 Windows XP at VERY low resolution, and nagging about it. More interesting? Norman Antivirus is running, but complaining about missing updates. There's also a VNC icon there... Hm.... Oh, and a License Wizard wants to say something as well. Fabulous!

Or perhaps I should just a post a picture taken with my Samsung Galaxy S2, to summarize everything with their own words:
I'm pretty sure there doesn't exist any risk analysis at these hotels whatsoever, concerning the installation, configuration and maintenance of these infochannel systems. Furthermore I fully believe that they have never even considered the reputation consequences of pr0n rolling over their infochannel, in the middle of conservative country here in Stavanger. As far as I can remember, people didn't complain after Major Malfunction displayed "pr0n wants to be free!" on all room tvs at his hotel in Vegas many years ago.
--
As we like to say here in Norway; any media coverage is good coverage?
Posted by securitynirvana
Email ThisBlogThis!Share to TwitterShare to FacebookShare to Pinterest