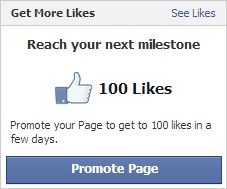 Passwords^13 in Las Vegas was exceptionally great. I may not be totally neutral when saying so, but after the conference and putting the videos online, I wanted to try out Facebook Promoted Posts. I was deeply disappointed. Here's why.


First of all, I'm one of the millions running Chrome + Adblock. I don't mind seeing some ads here and there, sometimes I even click on them. I'm just annoyed by all the damned popups, moving objects, music etc that pretty much kills my experience of whatever content I was looking for in the first place. I really could need a "Dislike" button on every ad I see.

I also know that tons of people run Facebook Purity to clean up the users experience of Facebook, removing ads and other annoyances for you.

None. Just curiosity, and the willingness to spend some dollars to prove to myself its useless for my purposes, or at least doesn't provide the value for money I would expect.

These are screenshots from my public (company) Facebook page, plus links to videos. There were 2 posts I wanted to promote for my little experiment. The first one was the talk from Dominique Bongard (Reversity on Twitter), founder & ceo of 0XCITE in Switzerland. He did a presentation that reporters and anyone into security & privacy should take an interest into. After putting the video up on Youtube, I announced its availability on Twitter, Google+, Linkedin and Facebook.

The same thing with Rick Redman (Minga) from Korelogic. He's the founder and primary organizer of the CrackMeIfYouCan competition at Defcon. His talk on  why your corporate password policy suck is worth watching if you haven't done so already.

After my *massive* and almost unlimited budget of USD 70,- was spent in less than 48 hours, with USD 50,- for promoting Dominique and USD 20,- for Rick, these were my results:

The numbers are "Total Reach" and "Paid Reach". As you can see, I have to pay for pretty much anyone to have them "like" or even watch anything I post online. :-) 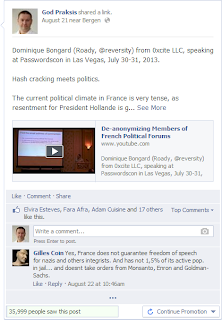 But take a look at the details here; how many "got involved: 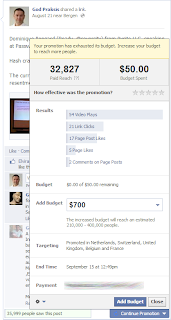 Now this might just be me, but seeing the numbers above, AND the Analytics numbers available to me on Youtube.... Meh. Nowhere near to what I would expect. Perhaps its just me believing that people above age 20 in France and countries close them would take an interest in this topic?

Moving on to the results for the USD 20,- investment for Rick Redman's talk, numbers are just as disappointing. 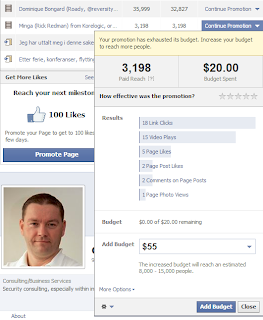 My first, and probably last conclusion on FB Promoted Posts

Crap. Period. What annoys me the most is that I do not get any additional info on who are all these people I have 'reached'? Did they actually see the promoted posts? Did the post display in their newsfeed, the upper right corner, or where? How many people in each country? Age statistics? Occupation? Interests?

For those who clicked, liked, commented & watched: Thank you.

With a budget of USD 70,- I'm pretty sure I could get more involvement by spending an hour or 3 running around in my local city center, asking people to click & like.

Mission failed - as pretty much expected. Sorry Dominique & Rick. :-)
Posted by securitynirvana
Email ThisBlogThis!Share to TwitterShare to FacebookShare to Pinterest