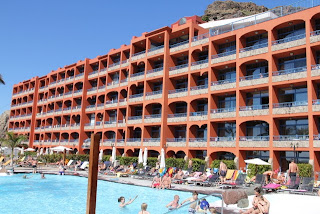 I've been on vacation with my wife and our daughter for one week at Gran Canaria (Spain). The picture on the left here shows parts of the hotel we stayed at. The tour operator as well as the hotel name shall remain anonymous in this blog post, as I don't think my observations are unique for this hotel only.

Being on vacation doesn't mean leaving my interest in security & safety at home, hence this blog post.


First an interesting observation regarding the use of credit cards for payment. Almost all stores required an extra piece of identification, preferably passport, before accepting payment by card. Having my picture and name on the card was not enough. I guess the problem of skimming and stolen cards has been, or still is a big problem in Spain, as it is in many other European countries as well. Good thing to see that such a simple control seem to be in place to protect end-users.

Anyway; as soon as we arrived at the hotel and our room (or "apartment", as they like to call it), I had a look at the emergency exit information, the location of fire fighting equipment and so on. Hopefully not needed, but being prepared is usually a good idea. We were situated on the second floor, with a small balcony, and here is a picture of the door leading out to the balcony: 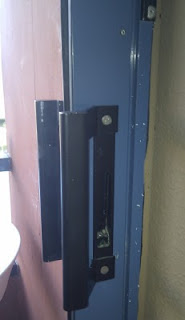 Notice the absence of a lock. We could not lock the sliding door, and it was just as easy to open it from the outside as it was from the inside.
Warning number 1: If you have kids who get up early in the morning, you probably want to block that door to prevent them from going out (and start climbing on the chairs for a better view...)
Warning number 2: afraid of strangers - thieves - entering the room at any given time? You have a problem. If you take a look at the top image, it is fairly easy to climb from balcony to another, at least sideways. Even worse: most of the rooms on the ground floor had the same problem - no lock on the balcony doors. That's beyond stupid, if you ask me.
Talking to another family, they said they asked in the reception about this, and were told that they had to ask the owners of that part of the hotel, as "their" part did in fact have locks on the balcony doors. No further resolution of the problem, they "surrendered" to the in-room safety box. This of course gives the obvious question: which hotel did we stay at? (Since the entire building/area had one name, and apparently one reception etc..). I'd guess any insurance company would *love* this...
But of course, if you were actually afraid of any valuables, you could deposit 10,- Euros and pay another 2,- Euros per day to use the in-room safety box (which I did). Here are the instructions, please read carefully:
Unfortunately I didn't take a picture of the safety box, which was located inside the wardrobe in the bedroom.  A rather small box, height and width suitable for an iPad, a camera and some other stuff. The box was attached to the wardrobe, but I'm a little unsure if it was also connected to the concrete wall behind the wardrobe. My guess; a decent crowbar should do the job. (Good observation though; a 20 minute delay between every 4 attempts to enter the correct PIN is good!)
So, could I deposit the rest of our clothes, suitcases and other stuff in the reception? Yes, but without any responsibility or penalties for the hotel if lost/stolen/damaged. I guess going on vacation does involve a bit of simple risk analysis, usually ending up with "Either we go on vacation, or we don't, ok?". Damn.
Speaking of hotel reception, here's a picture I took from the reception area: 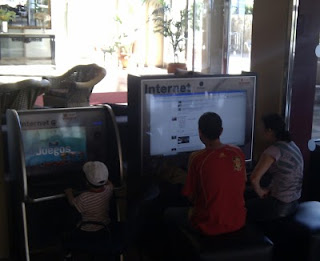 Yup, that's Facebook on a 42 inch screen. No wireless access, it was either GSM/3G (at insane prices!), or tossing Euro coins onto the computer/PS3 residing inside that cabinet you see there. Absolutely no privacy there if you wanted to check out Facebook or your company webmail (which I observed several people do..) Oh, and the PC inside were running Windows XP, and had a full keyboard as well as a card reader (CF, SD etc..) available. NOT the best place to ask for either security or privacy. :-)

It's 2011. People go on holiday, but still want Internet access wherever they go. This was supposedly a 4-star hotel. Give people what they want - and try to make it just a little secure as well. You know; safeguarding your customers just might be a good idea after all.


--
What do you know: I forgot an interesting piece of information at the end here.. Here's a bottle of water and a box of mixed fruits juice: 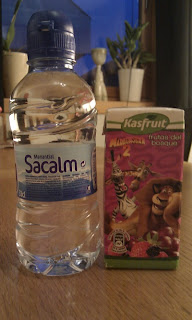 Both were purchased at Gran Canaria and placed in our hand luggage before entering the security control at the airport of Las Palmas, Gran Canaria. I found them when we got home and unpacked everything. Luckily water and fruit juice are not the most explosive or combustible liquids available.
Posted by securitynirvana
Email ThisBlogThis!Share to TwitterShare to FacebookShare to Pinterest